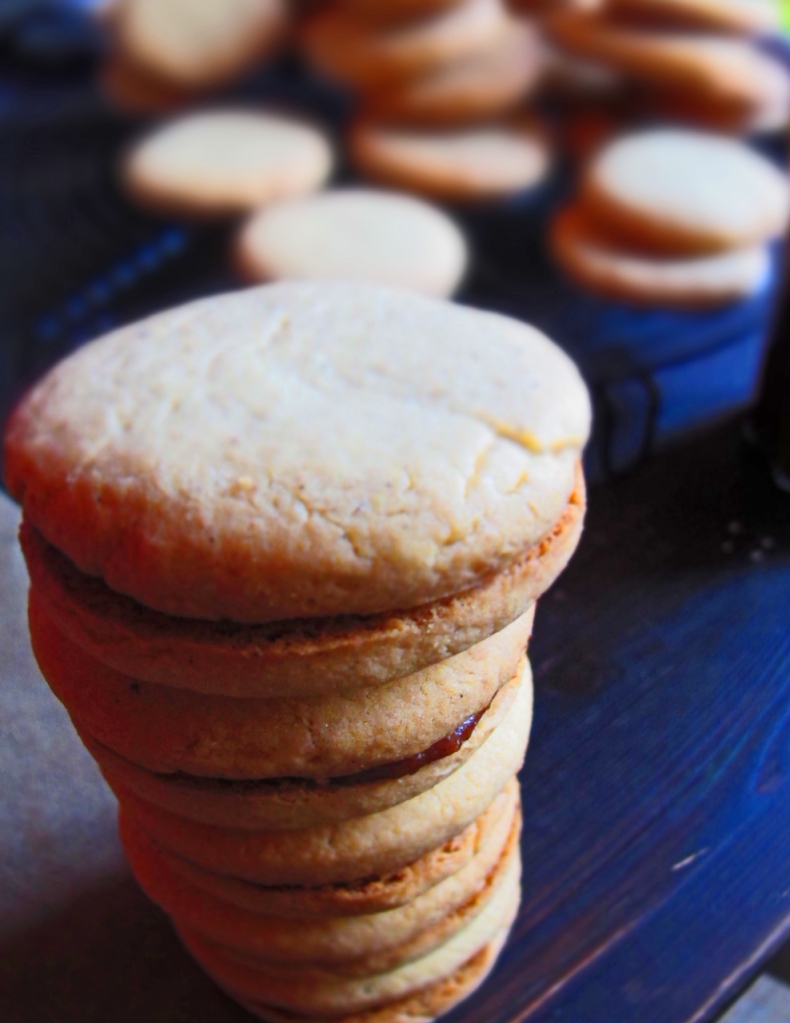 Last week I’ve been inspired by two posts from different blogs. Both present the South American cookies called ‘Alfajores’ which are very famous over there. When I’ve seen them and imagined how they taste I couldn’t resist to try them immediately. This was one of my plans for the weekend. I especially love the weekend time to use for baking as you don’t have such time pressure compared of doing something after work. But even last weekend was more or less fully booked, but in the end I found some time in between those plans to go for them which made me pretty happy. 😉

Mostly ‘Alfajores’ are filled with ‘dulce de leche’ which is very famous in South America. About two years ago I travelled to Argentina. I didn’t know this cream before but if I’d have known I’d just have gone for ‘dulce de leche’. 😉 There is not much to add here, but only that I simply love it… It’s kind of: I am in love with it! But I was also in love with Argentina, especially Buenos Aires. The city offers you lot of activities, very nice shops, bars and especially nice people. I really struggled when this journey ended and had to fight with my tears. But I know I will once go back again… 😉 so it’s fine now…

However, over there I made my benefits of this lovely cream and back home I immediately had it in my fridge. Anyhow it came never into my mind to make it myself. For some recipes it’s sometimes just not the right time, maybe because of other important things you have in your mind. But priorities can change and last weekend it was finally the right time to make it at home.

I adapted the ideas to either add coconut flour to the cookies or dip into chocolate from the following blogs Das Trüffelschwein (German) and The maker Girl. Same same but different! 🙂

3 egg yolks,
add one after another while mixing

200g corn starch,
150g spelt flour,
½ tsp baking soda,
2 tsp baking powder,
mix first in a separate bowl, then add small portions into the butter/sugar bowl until the dough is smooth, wrap into a cling film and put into the fridge for at least 30 minutes

preheat the oven to 180 degrees Celsius

roll the dough with approx. 7mm thickness onto a little floured surface, cut out the cookies with approx. 5cm diameter and put on the baking sheet and then into fridge for at least 10min

put into oven for approx. 12-14 minutes, and then let cool down

½ tsp baking soda,
1 tbsp water,
dissolve the baking soda in the water and stir into milk/sugar, put back to low heat and stir occasionally, it takes about 3-4 hours until the brown pasty Caramel is done